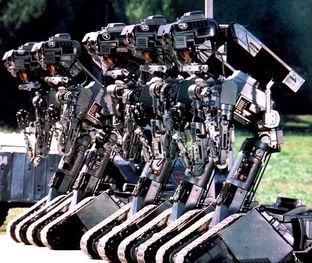 Automation may be a good thing, but don't forget that it began with Frankenstein.—Anonymous

Automation has opened up for thousands of skilled employees a whole new world of unemployment.—Anonymous

Why should we take it upon ourselves to pick up the pieces after industry discards people for machines?  Isn't it about time unions got in there before the fact to insist that there must be some obligation to people in all this?—Harry Bridges

It is appallingly obvious our technology has exceeded our humanity.—Albert Einstein

As machines become more and more efficient and perfect, so it will become clear that imperfection is the greatness of man.—Ernst Fischer

Clearly the most unfortunate people are those who must do the same thing over and over again, every minute, or perhaps twenty to the minute. They deserve the shortest hours and the highest pay.—John Kenneth Galbraith, American economist

Instead of proving to be "labor saving devices," our machines create more work for more of us to do! Instead of the "problem" of leisure, we face an array of problems caused by overwork; families that erode because we have less time to be at home, troubled and troubling young people who share little or no time with adults, anemic communities bled dry of the people's time, their life's blood, and institutions that focus solely on teaching people how to work rather than how to live together freely.—Benjamin Kline Hunnicutt

You can not endow even the best machine with initiative.-- Walter Lippmann

Instantly, the noise stopped. The whole room lay in perfect silence. The tire builders stood in long lines, touching each other, perfectly motionless, deafened by the silence....  For the first time in history, American mass-production workers had stopped a conveyor belt and halted the inexorable movement of factory machinery.-- Ruth McKenney, ("Industrial Valley")

Technology will save us if it doesn't wipe us out first.—Pete Seeger, folksinger, songwriter, activist, pacifist, and humanist

Too often man becomes clever instead of becoming wise, he becomes inventive but not thoughtful--and sometimes...he can create himself right out of existence.—Rod Serling, The Twilight Zone (closing of "The Brain Center at Whipple's")