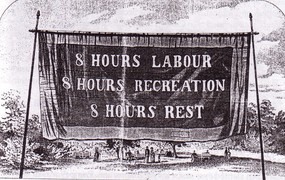 I don't mind coming to work -- I just don't want to stay when I get there.—Louis H. Albert

Butter was plastered on to the roll with no regard for the hard labor of the cow.--Kate Atkinson, novelist and playwright, "Life After Life" (2013)

Most Americans believe that there is a law that protects them from being fired for 'no cause.' But they're wrong. When entering the workplace, citizens are transformed into employees who leave their rights at the door.—Elaine Bernard

We are not complaining about the work. We want to see our hard work reflected in our pay.—Emmett J. Bogdon, President NALC Branch #116 (IN)

When a man feels he cannot leave his work, it is a sure sign of an impending collapse.—Supreme Court Justice Louis Brandeis


The best of wages will not compensate for excessively long working hours which undermine heath.—Supreme Court Justice Louis Brandeis

Better to starve fighting than to starve working.-- A slogan of the Lawrence, Massachusetts "Bread and Roses" strike of 1912


I'm a working stiff.  I just happened to be around at the right time and nobody else wanted the job.—Harry Bridges, President of the ILWU (Longshoremen) for 40 years

So much of what we call management consists in making it difficult for people to work.— Peter Drucker

There are two kinds of people, those who do the work and those who take the credit. Try to be in the first group; there is less competition there.—Indira Gandhi

Don't work jobs that you hate to buy things you don't need.—Otis Gibbs (from the song "Jesus On The Couch")

Work and pray, Live on hay; You'll get pie in the sky when you die.—Joe Hill

God give me work, till my life shall end.  And life, till my work is done.—Winifred Holtby

All my sympathies are on the side of those who toil--of those who produce the real wealth of the world--of those who carry the burdens of mankind.— Robert Green Ingersoll (from the essay "Eight Hours Must Come", 1890)

A bad day at work is better than a good day in hell.—Scott Johnson

In our glorious fight for civil rights, we must guard against being fooled by false slogans, as 'right-to-work.' It provides no 'rights' and no 'works.' Its purpose is to destroy labor unions and the freedom of collective bargaining... We demand this fraud be stopped.-- Martin Luther King, Jr.

More men are killed by overwork than the importance of the world justifies.—Rudyard Kipling

If hard work were such a wonderful thing, surely the rich would have kept it all to themselves.— Lane Kirkland


A working class hero is something to be. —John Lennon

Anyone with a part-time job works full-time for half salary.—Denise D. Lynn

When a man tells you that he got rich through hard work, ask him whose.-- Don Marquis

Every day I get up and look through the Forbes list of the richest people in America. If I'm not there, I go to work.—Robert Orben

We just come to work here, we don't come to die.—Harry Stamper, Longshoreman

If you expect to see the final results of your work, you simply have not asked a big enough question.—I.F. Stone

People who live in Wonderland may not have noticed, but there is a lot of work to be done here.—AFL-CIO President Richard Trumka, January 19, 2011

In an industrial society which confuses work and productivity, the necessity of producing has always been an enemy of the desire to create.—Raoul Vaneigem