Merit pay's problem is that it becomes the defacto purpose of teachers once put into place.--Tripp Babbitt, columnist and consultant

NAFTA and GATT have about as much to do with free trade as the Patriot Act has to do with liberty.—Michael Badnarik, Libertarian Presidential candidate

In Unity there is strength; We can move mountains when we're united and enjoy life --Without unity we are victims. Stay united.—Bill Bailey

Silence never won rights. They are not handed down from above; they are forced by pressures from below.—Roger Baldwin

Laws are spider webs through which the big flies pass and the little ones get caught.--Honoré de Balzac

Sometimes the law defends plunder and participates in it. Sometimes the law places the whole apparatus of judges, police, prisons and gendarmes at the service of the plunderers, and treats the victim -- when he defends himself -- as a criminal.—Frederic Bastiat, "The Law"

Every year, the compensation representatives at the various plants were instructed to compute and estimate the Workmen's Compensation costs for the plant for the coming year and we had to turn those estimates in to the accountants for the corporation. The safety personnel at the plant did the same. They computed their costs...then it was just a question of the corporation deciding which was cheaper, to take some injuries, take some deaths, pay some Workmen's Compensation or spend a lot of money and make it safe.—Daniel M. Berman

Most Americans believe that there is a law that protects them from being fired for 'no cause.' But they're wrong. When entering the workplace, citizens are transformed into employees who leave their rights at the door.—Elaine Bernard

Without unions, workers will lose many of the protections against abusive employers.  Wages for all will be depressed, even as corporate profits soar.  The American Dream will be destroyed for millions.  And we will have a government of the corporations, by the already powerful, for the wealthy. —Kenneth Bernstein, teacher and blogger, in a 2011 CNN.com opinion piece on the Wisconsin measure to strip public employees of collective bargaining rights 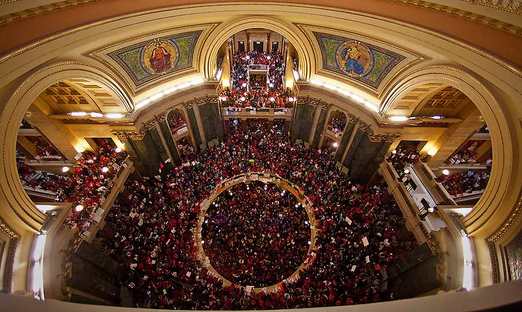 '70,000 in Solidarity' (photo by Al Rodgers)
The most potent weapon in the hands of the oppressor is the mind of the oppressed.—Steven Biko

Moe Biller
I've often said that if you could awaken all the martyrs in history and ask them if they wanted to be martyrs again, my belief is that they would say not. But if you asked them would they do it all over again, they would say yes.—Moe Biller, APWU

It is time that the USPS realized APWU is a stand-up union. We will not back away from our determination to achieve justice and dignity for all the Postal Workers we represent.—Moe Biller, President, American Postal Workers Union, 1982

Giving private delivery firms access to mail boxes would lead to a glut of unwanted materials and destroy the security and sanctity of the mail.—Moe Biller, President, American Postal Workers Union, 1996

There will be no waiver granted by the APWU to the Postal Service to increase the use and number of casuals at the national or local level.—Moe Biller, President, American Postal Workers Union, 1997

When a man says he approves of something in principle, it means he hasn't the slightest intention of putting it in practice.—Bismarck

Wherever you are, there are people who are greedy and will take advantage of their workers.—Jim Blau, SEIU

Never attribute to malice that which is adequately explained by stupidity.—Arthur Bloch

The media is un-independent. They are the mouthpiece of the government.—William Blum, author and critic of American foreign policy

[O]ur leaders do not mean well. They do not have any noble goals of democracy and freedom and all that jazz....  And as long as an American believes that the intentions are noble and honorable, it's very difficult to penetrate that wall.—William Blum, author and critic of American foreign policy

We are not complaining about the work. We want to see our hard work reflected in our pay.—Emmett J. Bogdon, President NALC Branch #116 (IN)

The marvel of all history is the patience with which men and women submit to burdens unnecessarily laid upon them by their government.—William E. Borah

True wisdom lies in gathering the precious things out of each day as it goes by.—E.S. Bouton

Ways may some day be developed by which the government, without removing papers from secret drawers, can reproduce them in court, and by which it will be enabled to expose to a jury the most intimate occurrences of the home. —Supreme Court Justice Louis Brandeis, 1928

We can either have democracy in this country or we can have great wealth concentrated in the hands of a few, but we can't have both.—Supreme Court Justice Louis Brandeis

The best of wages will not compensate for excessively long working hours which undermine heath.—Supreme Court Justice Louis Brandeis

Strong, responsible unions are essential to industrial fair play.  Without them the labor bargain is wholly one-sided.  The parties to the labor contract must be nearly equal in strength if justice is to be worked out, and this means that the workers must be organized and that their organizations must be recognized by employers as a condition precedent to industrial peace.—Supreme Court Justice Louis Brandeis

When a man feels he cannot leave his work, it is a sure sign of an impending collapse.—Supreme Court Justice Louis Brandeis

Better to starve fighting than to starve working.-- A slogan of the Lawrence, Massachusetts "Bread and Roses" strike of 1912

Yes, it is bread we fight for--but we fight for roses too.—"Bread and Roses," a strike poem 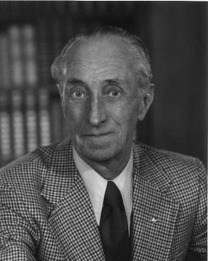 Harry Bridges
I'm a working stiff.  I just happened to be around at the right time and nobody else wanted the job.—Harry Bridges, President of the ILWU (Longshoremen) for 40 years

The most important word in the language of the working class is "solidarity."—Harry Bridges

Why should we take it upon ourselves to pick up the pieces after industry discards people for machines?  Isn't it about time unions got in there before the fact to insist that there must be some obligation to people in all this?—Harry Bridges

It is a good union policy that officers shouldn't earn so much that they drift away from the members.—Harry Bridges

Labor can not stand still. It must not retreat. It must go on, or go under.—Harry Bridges

Interfere with the foreign policy of the country?....Sure as hell!  That's our job, that's our privilege, that's our right, that's our duty.—Harry Bridges

I would have worked with the devil himself if he'd been for the six hour day and worker control of the hiring hall.—Harry Bridges
Show me a guy who’s afraid to look bad, and I’ll show you a guy you can beat every time.—Lou Brock, baseball player

Ah, but a man's reach should exceed his grasp, or what's a heaven for?—Robert Browning

The "what should be" never did exist, but people keep trying to live up to it. There is no "what should be," there is only what is.—Lenny Bruce, comedian

I didn't do it, man, I only said it.—Lenny Bruce, comedian

Now the problem I had in understanding the law was because of the language of the law. Instead of taking each word and finding out the case that the word related to, once in a while I got lazy and I would apply common sense. And then I got really screwed up.—Lenny Bruce, comedian

The quality of employees will be directly proportional to the quality of life you maintain for them.—Charles E. Bryan

Can anything be imagined more abhorrent to every sentiment of generosity and justice, than the law which arms the rich with the legal right to fix, by assize, the wages of the poor? If this is not slavery, we have forgotten its definition. Strike the right of associating for the sale of labor from the privileges of a freeman, and you may as well bind him to a master, or ascribe him to the soil.—William Cullen Bryant

You may be sure that in this "new international system," the American citizen will count for precious little.—Pat Buchanan, 1993

Where are the jobs?  Have they come and gone?  To China.  Or maybe to India?  When we find those infamous weapons of mass destruction, will we also find the missing jobs?—R.T. Buffenbarger, IAM, September 20, 2004

At the moment, we have leaders in this country who care more about the short-term profits of big corporations than they do about the long-term well being of the average working man and woman.—R.T. Buffenbarger, IAM, September 20, 2004 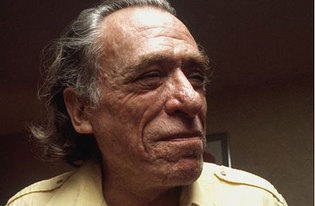 Charles Bukowski
You begin saving the world by saving one person at a time; all else is grandiose romanticism or politics.—Charles Bukowski, poet and postal worker, author of Post Office

Genius might be the ability to say a profound thing in a simple way.—Charles Bukowski, poet and postal worker, author of Post Office

Before you kill something make sure you have something better to replace it with...—Charles Bukowski, poet and postal worker, author of Post Office

What matters most is how well you walk through the fire.—Charles Bukowski, poet and postal worker, author of Post Office

[T]he most memorable concern of mankind is the guts it takes to face the sunlight again.—Charles Bukowski, poet and postal worker, author of Post Office 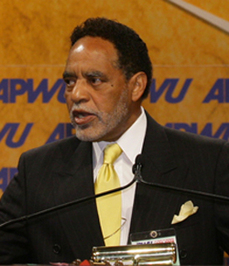 William Burrus
If we continue to buy imports...where will our children work?—bumper sticker

All government, indeed every human benefit and enjoyment, every virtue, and every prudent act, is founded on compromise and barter.—Edmund Burke

You can not negotiate with the turkey over what day Thanksgiving is.  Whether it is Thursday or Friday, the turkey is the victim.  And WE will NOT be victimized!—APWU President William Burrus, Postal Press Association Conference, 8/2/03

Those unions that enjoy the right to strike have no guarantee that sacrificing their jobs and their livelihood will result in victory but they nevertheless engage in lengthy strikes, not because they are assured of winning but because they are determined to fight.—William Burrus, 1998

A pig with lipstick is still a pig.—William Burrus, 1998

The role of a labor union is to ensure that the balance is not tipped in favor of the employer when employees do not receive wages and benefits commensurate with their contribution.—William Burrus

Three hundred and seventy-five thousand postal employees are deserving of improved wages and working conditions, and through struggle, we will ultimately prevail.  We will fight you with every tool at our disposal, and we will ultimately achieve our goals.—APWU President William Burrus (2001)

Tell them that the APWU is united and strong.  Here we are, and we are prepared to fight.—APWU President William Burrus

Labor will remain united and continue to work to protect the interests of America’s working families.—William Burrus, November 2004

Too often we underestimate the power of a touch, a smile, a kind word, a listening ear, an honest compliment, or the smallest act of caring, all of which have the potential to turn a life around.—Leo Buscaglia

America is more than a geographical location. It is an inspirational dream of freedom.—Melinda Buskirk, steward (WV) APWU