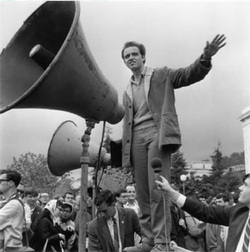 Mario Savio
Most income of the rich and super rich is the result of speculation, usury, and theft of the product of labor. Every mathematical study of the American economy verifies these simple facts. The rich and super rich are superfluous to society, they're irrelevant, they do nothing that can't be done without them.--Danny S, Yahoo comment to the story "The Poor Should Stop Whining, Says Luxury CEO"

Patience is the companion of wisdom.—Saint Augustine

Those who cannot remember the past are condemned to repeat it.--George Santayana

The Civil Rights movement just burst on the United States right on the tube.  We saw images of young people being attacked by dogs, by powerful water-cannons.  And they faced their fears, they overcame their fear by holding one another.  That was a lesson that what we need, the strength that we need, we can find in one another.  It is, of course, an image of great courage, and I have not had to face the kinds of things that those people had to face.  But if they were willing to face that, then I felt by that very thing both shamed and inspired to do what I could do.  And to take the lesson of holding one another as a way it could be done.—Mario Savio

I spoke of wings.....you just flew!—Mike Scott, song lyric from "The Whole of The Moon" by the Waterboys 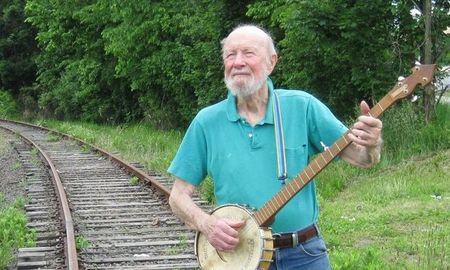 The main mistake made by unions is people not being willing to talk to people that you strongly disagree with. Not just talk, but communicate.—Pete Seeger, folksinger, songwriter, activist, pacifist, and humanist

Don't let schoolin' get in the way of your education.—Pete Seeger, folksinger, songwriter, activist, pacifist, and humanist

Technology will save us if it doesn't wipe us out first.—Pete Seeger, folksinger, songwriter, activist, pacifist, and humanist

I'm gonna invoke the First Amendment, the right of freedom of association...We're all Americans. We can associate with whoever we want to, and it doesn't matter who we associate with.—Pete Seeger, folksinger, songwriter, activist, pacifist, and humanist to the House Committee on Un-American Activities, August 1955

Some may find them merely diverting melodies. Others may find them incitements to Red revolution. And who will say if either or both is wrong? Not I.—Pete Seeger, folksinger, songwriter, activist, pacifist, and humanist

There is hope for the world.—Pete Seeger, folksinger, songwriter, activist, pacifist, and humanist, from "The Power Of Song" (2007)

The key to the future of the world is finding the optimistic stories and letting them be known.—Pete Seeger, folksinger, songwriter, activist, pacifist, and humanist

My job is to show folks there's a lot of good music in this world, and if used right it may help to save the planet.—Pete Seeger, folksinger, songwriter, activist, pacifist, and humanist (2009)

Suppose they’re working you so hard it’s just outrageous,
They’re paying you all starvation wages;
You go to the boss, and the boss would yell,
"Before I'd raise your pay I’d see you all in Hell."
Well, he’s puffing a big see-gar and feeling mighty slick,
He thinks he’s got your union licked.
He looks out the window, and what does he see
But a thousand pickets, and they all agree
He’s a bastard - unfair - slave driver -
Bet he beats his own wife.
—Pete Seeger, folksinger, songwriter, activist, pacifist, and humanist, from "Talking Union" (1941)

I still call myself a communist, because communism is no more what Russia made of it than Christianity is what the churches make of it. But if by some freak of history communism had caught up with this country, I would have been one of the first people thrown in jail.—Pete Seeger, folksinger, songwriter, activist, pacifist, and humanist (1995)
United we bargain; divided we beg!—SEIU Health Care Workers Union Local 250 button

Too often man becomes clever instead of becoming wise, he becomes inventive but not thoughtful--and sometimes...he can create himself right out of existence.—Rod Serling, The Twilight Zone (closing of "The Brain Center at Whipple's")

You take my life when you do take the means whereby I live.—William Shakespeare

America is being sold to the lowest bidders, and those whose jobs remain in this country are at the mercy of their employers.--Mary Shaw, writer and activist

If we will not endure a king as a political power, we should not endure a king over the production, transportation, and sale of any of the necessities of life.--Senator John Sherman, principal author of the Sherman Antitrust Act

Socrates
There is no short cut to a place worth going.—Beverly Sills, opera singer

As soon as the land of any country has all become private property, the landlords, like all other men, love to reap where they never sowed, and demand a rent even for its natural produce.— Adam Smith, The Wealth of Nations

You never expected justice from a company, did you?  They have neither a soul to lose nor a body to kick.— Sydney Smith

We must remember that a right lost to one is lost to all.—William Reece Smith, Jr.

I have been to the darkest corners of government, and what they fear is light.—Edward Snowden, American whistleblower and patriot

The only true wisdom is in knowing you know nothing.—Socrates

Nothing can harm a good man, either in life or after death.—Socrates

Without labor nothing prospers. —Sophocles

I knew from experience of the past that this butchering of people was done for the express purpose of defeating the eight-hour movement.—August Spies, testimony following the 1886 Haymarket Massacre

The time will come when our silence will be more powerful than the voices you strangle today.—August Spies, railroaded along with 7 others following the Haymarket Massacre, at the time of his execution

We just come to work here, we don't come to die.—Harry Stamper, Longshoreman 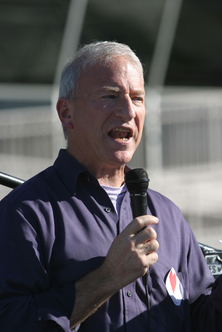 Andy Stern
Let workers decide if they want to be divided from the other union members in their industry so that each union makes its own deals with employers instead of uniting workers' strength - or be part of one, powerful, industry-based movement.—Andy Stern, SEIU President

Today I send this message to every emerging global corporation: "justice; family, community, and union" are the same in every language and, wherever you go and whatever you do, a new global labor movement is coming to find you.—Andy Stern, SEIU President

Today's global corporations have no permanent home, recognize no national borders, and salute no flag but their own corporate logo and take their money to anywhere where they can make the most--and pay the least... So today I am asking you, SEIU’s 21st century leaders, to decide to go where no union has ever gone before to authorize SEIU to pursue alliances that will build the first truly global union in world history.—Andy Stern, SEIU President

We can bring to earth a new world from the ashes of the old because our union transforms us the powerless into the powerful. And I ask you to join together in using all that power--all that strength to make the dreams of all workers and communities around the world come true.—Andy Stern, SEIU President

Unions have been the best anti-poverty program that actually worked and did not cost the government a dime. But as unions grow smaller- not stronger- our ability to act as an economic mechanism to distribute the gains of our work and raise all workers' wages and benefits up is disappearing.—Andy Stern, SEIU President

Those who do not want dramatic change have adopted the language but not the substance of change. They have learned the words -- "crisis," "change," "growth," "organizing," and "politics" -- but they are standing in the way of real action. They are faking change instead of making change.—Andy Stern, SEIU President

We may have lost the first skirmish but we have built a mighty army for change.—Andy Stern, SEIU President

Once, a union job at GM or AT&T was a bridge to success. Now, a nonunion Wal-Mart job is a bridge to nowhere.—Andy Stern, SEIU President
Give me the young man who has brains enough to make a fool of himself!—Robert Louis Stevenson

If you expect to see the final results of your work, you simply have not asked a big enough question.—I.F. Stone, journalist

What is economics? A science invented by the upper class in order to acquire the fruits of the labor of the underclass.—August Strindberg, 1884

I can hate the war but I will never quit loving the warrior.—Bob Stutts, APWU National Business Agent (posted on 21st Century Postal Worker, November 24, 2004)

Life has meaning only in the struggle. Triumph or defeat is in the hands of the Gods... So let us celebrate the struggle!—Swahili Warrior Song 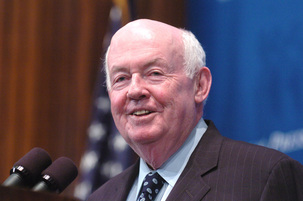 John Sweeney
When fewer workers have unions, the standard of living falls for everyone and the gap between the rich and poor grows.—John Sweeney, 2003

As it has over the decades, the union movement stands for the fundamental moral values that make America strong: quality education for our children, affordable health care for every person—not just some—an end to poverty, secure pensions and wages that enable families to sustain the middle-class life that has fueled this nation’s prosperity and strength. Union members and other working family activists don’t just vote our moral values—we live them. We fight for them, day in, day out. Our commitment to economic and social justice propels us and everything we do.—John Sweeney, November 2004

We believe hard work nourishes the soul and should nourish the body and support the family as well. We believe every one of us has an equal claim to the prosperity of America. And that it’s our job to ensure a better life for the generations that come after us.—John Sweeney, November 2004

I think the greedy corporate owners have to be confronted with the fact that they are ignoring their most powerful resource -- their workers.—John Sweeney, 1995

There is a growing consensus that Globalization must now be reshaped to reflect values broader than simply the freedom of capital.—John Sweeney

Clearly, the Global Economy isn't working for workers in China and Indonesia and Burma any more than it is for workers here in the United States.—John Sweeney

We can no longer allow multi-nationalists to parade as agents of progress and democracy in the newspapers, even as they subvert it at the workplace.—John Sweeney

We should measure the success of our economy by the breadth of our Middle Class and the scope of opportunity offered to the poorest child to climb into that Middle Class.—John Sweeney

When a true genius appears in this world, you may know him by this sign, that the dunces are all in confederacy against him.—Jonathan Swift

Our cause is a common one. It is war between poverty and wealth. … This moneyed power is fast eating up the substance of the people. We have made war upon it, and we mean to win it. If we can, we will win through the ballot box; if not, then we shall resort to sterner means.—William Sylvis