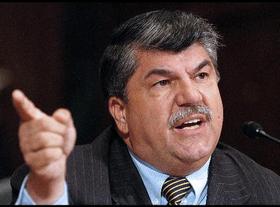 Richard Trumka
On the evening bus, the tired, pinched faces of young file clerks and elderly secretaries tell us more than we care to know.— Studs Terkel

If we lose our title of "land of the free," what have we got?— Helen Thomas, Washington reporter

[T]he whole point on this picaresque is that the American-style rogue-hero must not merely tease or insult the Silent Majority, but abuse it, outrage it, twist it, hurt it, smash it.— Hunter S. Thompson, "gonzo" journalist

If Free Trade has been so good to our standard of living, then WHY has our largest employer gone from high union wage paying and benefits GM to low wage paying benefits skirting Wal-Mart???—Barbara Toncheff (from jobjournal.com)

It is time that all Americans realized that the place of labor is side by side with the businessman and with the farmer, and not one-degree lower.—Harry S Truman

It is amazing what you can accomplish if you do not care who gets the credit.—Harry S Truman

People who live in Wonderland may not have noticed, but there is a lot of work to be done here.—AFL-CIO President Richard Trumka, January 19, 2011

The ultimate goal of those who blame workers for Wall Street's economic crisis is to unravel the fabric of our common life in pursuit of greed and power.—AFL-CIO President Richard Trumka, May 20, 2011

Working people want a labor movement strong enough to help return balance to our economy, fairness to our tax system, security to our families and moral and economic standing to our nation.—AFL-CIO President Richard Trumka, May 20, 2011

For too long, we've been left after Election Day holding a canceled check, waving it about--"Remember us?  Remember Us? Remember us?"--asking someone to pay a little attention to us.  Well, I don't know about you, but I've had a snootful of that shit!--AFL-CIO President Richard Trumka, June 7, 2011

It doesn't matter if candidates and parties are controlling the wrecking ball or simply standing aside—the outcome is the same either way. If leaders aren't blocking the wrecking ball and advancing working families' interests, working people will not support them.—AFL-CIO President Richard Trumka, May 20, 2011 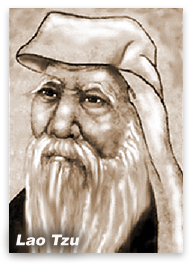 Lao Tzu
One who recognizes all persons as members of their own body is a sound person to guard them.—Lao Tzu (attributed)

The leader is a teacher who succeeds without taking credit.  And, because credit is not taken, credit is received.—Lao Tzu (attributed)

A leader is best
When people barely know that he exists,
Not so good when people obey and acclaim him,
Worst when they despise him.
`Fail to honor people,
They fail to honor you;'
But of a good leader, who talks little,
When his work is done, his aim fulfilled,
They will all say, `We did this ourselves.'—Lao Tzu (attributed)

The way to do is to be.—Lao Tzu (attributed)

People who have to fight for their living and are not afraid to die for it are higher persons than those who, stationed high, are too fat to dare to die.—Lao Tzu (attributed)

When I let go of what I am, I become what I might be.—Lao Tzu (attributed)

Conduct your triumph as a funeral.—Lao Tzu (attributed)
I cannot be fired.  Slaves have to be sold.—Unknown

Law! What do I care about the law? Ain't I got the power?—Cornelius Vanderbilt, robber baron

In an industrial society which confuses work and productivity, the necessity of producing has always been an enemy of the desire to create.—Raoul Vaneigem

The comfort of the rich depends upon an abundant supply of the poor.— Voltaire

It was the spirit of the workers that was dangerous.  The tired, gray crowds ebbing and flowing perpetually into the mills had waked and opened their mouths to sing.—reporter Mary Heaton Vorse writing about the 1912 "Bread and Roses" strike

The thing that lies at the foundation of positive change, the way I see it, is service to a fellow human being.—Lech Walesa

It is hardly possible to build anything if frustration, bitterness and a mood of helplessness prevail. —Lech Walesa

I must tell you that the supply of words on the world market is plentiful, but the demand is falling.  Deeds must follow words.—Lech Walesa

He who puts out his hand to stop the wheel of history will have his fingers crushed.—Lech Walesa

The defense of our rights and our dignity, as well as efforts to never let ourselves to be overcome by the feeling of hatred--this is the road we have chosen.—Lech Walesa

Activism is the rent I pay for living on this planet.—Alice Walker
​
Elizabeth Warren (born 1949) 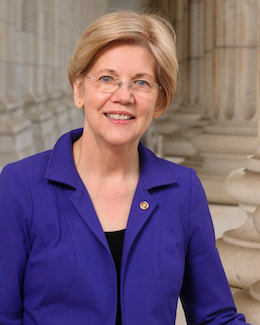 ​Until you have a seat at the table, you’re probably on the menu.
--Elizabeth Warren

Corporations are not people. People have hearts, they have kids, they get jobs, they get sick, they cry, they dance. They live, they love and they die. And that matters. That matters because we don’t run this country for corporations, we run it for people.--Elizabeth Warren (2012)

There is nobody in this country who got rich on his own - nobody.--Elizabeth Warren

What I've learned is that real change is very, very hard. But I've also learned that change is possible - if you fight for it.--Elizabeth Warren

Don’t be so focused in your plans that you are unwilling to consider the unexpected.--Elizabeth Warren (2016) 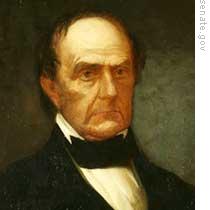 Daniel Webster
​Labor in this country is independent and proud.  It has not to ask the patronage of capital, but capital solicits the aid of labor.—Daniel Webster

The freest government cannot long endure when the tendency of the law is to create a rapid accumulation of property in the hands of a few, and to render the masses poor and dependent.— Daniel Webster

As can be seen in our history, the only answer to a powerful business leader is a powerful labor union.— Hilton M. Weiss

A downtrodden class... will never be able to make an effective protest until it achieves solidarity.—H.G. Wells

We are all in the gutter, but some of us are looking at the stars.—Oscar Wilde

Furious activity is no substitute for understanding.—H.H. Williams

Where conflicts arise between workers and bosses, between the rights of one class and the interests of the other, the machinery of the law is typically used as a weapon against the workers. Even where the law is contrary to the demands of powerful corporations, the police often act not from principle or legal obligation, but according to the needs of the ruling class. This tendency shouldn’t surprise us, if we remember the lengths to which the cops have gone in the defense of White supremacy, even as laws and policies have changed. With class, as with race, it is the status quo that the police act to preserve and the interests of the powerful that they seek to defend, not the rule of law or public safety. The law, in fact, has been a rather weak guide for those who are meant to enforce it.--Kristian Williams, author

The Constitution does not provide for first and second class citizens.—Wendell Lewis Willkie

While we are fighting for freedom, we must see, among other things, that labor is free.—Woodrow Wilson

Who said the United States was going to be a service nation, we were going to let everyone else produce?  That's crap!--William ("Wimpy") Winpisinger, International Association of Machinists president ("Winpisinger Speaks Out")

Why should [corporations] have the unfettered right to run all over the globe and do anything they want to do no matter who it discommodes, no matter who it injures, no matter which communities die from it, no matter how high the social scrap heap gets?—William ("Wimpy") Winpisinger, International Association of Machinists president ("Winpisinger Speaks Out")

I'm not interested in the corporation saying "You've got to compete against it or I'll take it over there."  Up yours, I tell them, buddy.  You might go there, but you go there and engage in a capital pool over there.  And build it the same way you built it here...but you're not taking profits that are the product of the hard worked for earnings of American citizens buying your products and then take it away from them.—William ("Wimpy") Winpisinger, International Association of Machinists president  ("Winpisinger Speaks Out")

Somebody wants access to your market, you get access to theirs.  And if they don't give you access to theirs, shut them off from ours.--William ("Wimpy") Winpisinger, International Association of Machinists president ("Winpisinger Speaks Out")

When a company wants to close down, move out and discontinue jobs in a community that has provided tax breaks and a good labor supply, the company owes the community something more than a goodbye.  The company ought to come before the bar, as it were, and justify why it has to close down.  If it cannot be justified it should be forbidden.  If it closes anyway, seize the assets for the community.—William ("Wimpy") Winpisinger, International Association of Machinists president

Scientific knowledge is not ever apolitical (i.e. neutral) in its application.—William ("Wimpy") Winpisinger, International Association of Machinists president

The continuing build-up of more and more and evermore implements of mass destruction is suicidal and I intend to go on saying so.—William ("Wimpy") Winpisinger, International Association of Machinists president
Every day, try to help someone who can't reciprocate your kindness.—John Wooden, college basketball coach

Experience is something you don't get until just after you need it.—Steven Wright, comedian

Do or do not.  There is no try.—Yoda (from the film "The Empire Strikes Back")

He wants someone to get to the bottom of it so they won't get to the top.—Roy Zimmerman, political satirist and singer, on the Governor Chris Christie "Bridgegate" scandal in New Jersey

Libertarians are two-year-olds with guns.—Roy Zimmerman, political satirist and singer, on Nevada rancher Cliven Bundy and his militia buddies claiming to want freedom when what they really want is to use land they don't own without having to pay to use it.