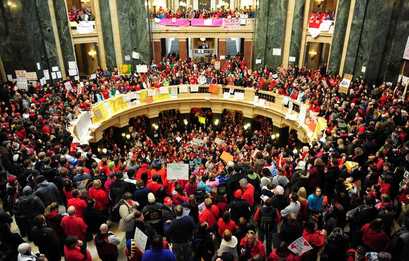 The people lead in Wisconsin, 2011 (photo by Al Rodgers)
The Radical does not sit frozen by cold objectivity.  He sees injustice and strikes at it with hot passion.--Saul Alinsky

Those who want change must be against sacred cows and not only innately irreverent but outwardly, purposefully irreverent in their actions. They must be iconoclastic bulldozers willing to be regarded as profane spoilers of the sacred myths.--Saul Alinsky

I've often said that if you could awaken all the martyrs in history and ask them if they wanted to be martyrs again, my belief is that they would say not. But if you asked them would they do it all over again, they would say yes.—Moe Biller, APWU

I'm a working stiff.  I just happened to be around at the right time and nobody else wanted the job.—Harry Bridges, President of the ILWU (Longshoremen) for 40 years

It is a good union policy that officers shouldn't earn so much that they drift away from the members.—Harry Bridges

What matters most is how well you walk through the fire.—Charles Bukowski, poet and postal worker, author of Post Office

Those who say it cannot be done should not interrupt those who are doing it. —Chinese Proverb

Be a light, not a judge; Be a model, not a critic.—Stephen Covey

One never notices what has been done; one can only see what remains to be done.—Marie Currie

I love those who can smile in trouble, who can gather strength from distress, and grow brave by reflection. 'Tis the business of little minds to shrink, but they whose heart is firm, and whose conscience approves their conduct, will pursue their principles unto death.— Leonardo da Vinci

If you go to the city of Washington, you will find that almost all of those corporation lawyers and cowardly politicians, members of congress, and mis-representatives of the masses claim, in glowing terms, that they have risen from the ranks to places of eminence and distinction.  I am very glad that I cannot make that claim for myself.  I would be ashamed to admit that I had risen from the ranks.  When I rise it will be with the ranks.—Eugene V. Debs

You must be the change you wish to see in the world.—Mahatma Gandhi 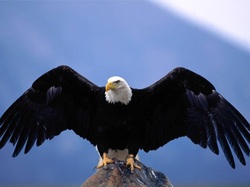 We have our principles, but we also must do things that are constantly compromising those principles.—Arthur Joseph Goldberg

I have nothing to say for myself, only that I have always tried to make this earth a little bit better.—Joe Hill

We are all here because we want to serve our brothers and sisters, and each individual should be given a constant opportunity to do that in the ways that will best benefit the Union as a whole.— Peter Holter-Mehren, WAPWU President (2002)


One man with courage makes a majority.—Andrew Jackson


I'm not going to quit. There is too much to do. People need jobs, equality, education. We still need to organize to learn how the economics and politics drive everything in life. Can't stop now.—Nellie Stone Johnson, at the age of 90 in 1995

I'm not a humanitarian, I'm a hell-raiser.—Mother Jones

It's better to be a lion for a day than a sheep all your life.—Elizabeth Kenny

The time is always right to do what is right.-- Martin Luther King, Jr.

All men dream:  But not equally.  Those who dream by night in the dusty recesses of their minds wake in the day to find that it was vanity:  But the dreamers of the day are dangerous men, for they may act their dream with open eyes, to make it possible.—T.E. Lawrence

If nobody quits until I do, there will be no quitting!— UMWA organizer John R. Lawson 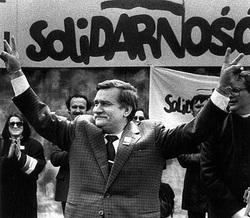 Lech Walesa
Personally, I look forward to continuing the fight for justice and equality on the workroom floor.  APWU will never NEVER allow [the] heinous thinking by management to continue without a battle.  It's an atrocity which must be and will be stamped out.  We are American workers and, most importantly, we are human beings!—Moe Lepore, Boston Metro Area Local APWU (1985)

If they're cutting your legs out from under you, that just means you're taller than they are; if they stab you in the back, it's because they can't face you.—Mike Levine, Red Bank Local APWU (attributed)

One who recognizes all persons as members of their own body is a sound person to guard them.—Lao Tzu (attributed)

A leader is best
When people barely know that he exists,
Not so good when people obey and acclaim him,
Worst when they despise him.
`Fail to honor people,
They fail to honor you;'
But of a good leader, who talks little,
When his work is done, his aim fulfilled,
They will all say, `We did this ourselves.'—Lao Tzu (attributed)

The leader is a teacher who succeeds without taking credit.  And, because credit is not taken, credit is received.—Lao Tzu (attributed)


It is hardly possible to build anything if frustration, bitterness and a mood of helplessness prevail. —Lech Walesa