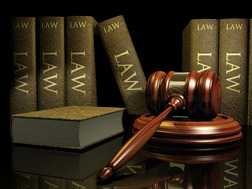 Laws are spider webs through which the big flies pass and the little ones get caught.--Honoré de Balzac


Sometimes the law defends plunder and participates in it. Sometimes the law places the whole apparatus of judges, police, prisons and gendarmes at the service of the plunderers, and treats the victim -- when he defends himself -- as a criminal.—Frederic Bastiat, "The Law"

The marvel of all history is the patience with which men and women submit to burdens unnecessarily laid upon them by their government.—William E. Borah

Now the problem I had in understanding the law was because of the language of the law. Instead of taking each word and finding out the case that the word related to, once in a while I got lazy and I would apply common sense. And then I got really screwed up.—Lenny Bruce, comedian

Our country has been ravaged and stolen by industrial pirates and yet, learned judges have decreed that it was "legal".... whatever the king has done, the courtiers have most humbly considered right and the guards and men-at-arms been ready to see that the slaves did not rebel against it all.—Joseph Ettor, IWW organizer ("Industrial Unionism: The Road To Freedom")

When people ask me, "Why can't labor organize the way it did in the thirties?' the answer is simple: everything we did then is now illegal.— Thomas Geoghegan

“Equal Justice Under The Law.”  That is a great goal.  But that goal has not been realized.—Arthur Joseph Goldberg

In the old days all you needed was a handshake. Nowadays you need forty lawyers. — Jimmy Hoffa

No lawyer should ever excite his employer that he has found a new way to beat a Union.  Because it doesn't work.— Jimmy Hoffa

In present conditions a workman may not unnaturally believe that only by belonging to a union can he secure a contract that shall be fair to him....If that belief, whether right or wrong, may be held by a reasonable man, it seems to me that it may be enforced by law in order to establish the equality of position...in which liberty of contract begins.—Supreme Court Justice Oliver Wendell Holmes

On their side the workers had only the constitution. The other side had bayonets.—Mother Jones

I asked a man in prison once how he happened to be there and he said he had stolen a pair of shoes. I told him if he had stolen a railroad he would be a United States Senator.—Mother Jones

In our glorious fight for civil rights, we must guard against being fooled by false slogans, as 'right-to-work.' It provides no 'rights' and no 'works.' Its purpose is to destroy labor unions and the freedom of collective bargaining... We demand this fraud be stopped.-- Martin Luther King, Jr.

Concentrated power can be always wielded in the interest of the few and at the expense of the many. Government in its last analysis is this power reduced to a science. Governments never lead; they follow progress. When the prison, stake or scaffold can no longer silence the voice of the protesting minority, progress moves on a step, but not until then.—Lucy Parsons

I'm gonna invoke the First Amendment, the right of freedom of association...We're all Americans. We can associate with whoever we want to, and it doesn't matter who we associate with.—Pete Seeger, folksinger, songwriter, activist, pacifist, and humanist to the House Committee on Un-American Activities, August 1955

Law! What do I care about the law? Ain't I got the power?—Cornelius Vanderbilt, robber baron

The freest government cannot long endure when the tendency of the law is to create a rapid accumulation of property in the hands of a few, and to render the masses poor and dependent.— Daniel Webster

Where conflicts arise between workers and bosses, between the rights of one class and the interests of the other, the machinery of the law is typically used as a weapon against the workers. Even where the law is contrary to the demands of powerful corporations, the police often act not from principle or legal obligation, but according to the needs of the ruling class. This tendency shouldn’t surprise us, if we remember the lengths to which the cops have gone in the defense of White supremacy, even as laws and policies have changed. With class, as with race, it is the status quo that the police act to preserve and the interests of the powerful that they seek to defend, not the rule of law or public safety. The law, in fact, has been a rather weak guide for those who are meant to enforce it.--Kristian Williams, author