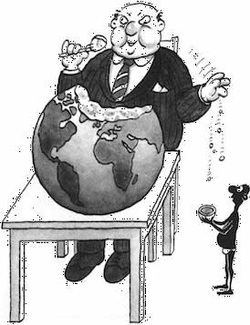 NAFTA and GATT have about as much to do with free trade as the Patriot Act has to do with liberty.—Michael Badnarik, Libertarian Presidential candidate

You may be sure that in this "new international system," the American citizen will count for precious little.—Pat Buchanan, 1993

Where are the jobs?  Have they come and gone?  To China.  Or maybe to India?  When we find those infamous weapons of mass destruction, will we also find the missing jobs?—R.T. Buffenbarger, IAM, September 20, 2004

At the moment, we have leaders in this country who care more about the short-term profits of big corporations than they do about the long-term well being of the average working man and woman.—R.T. Buffenbarger, IAM, September 20, 2004

Workers and their families may starve to death in the New World Order of economic rationality, but diamond necklaces are cheaper in elegant New York shops, thanks to the miracle of the market.—Noam Chomsky

If CEOs insist that middle class Americans compete with cheap foreign labor, why not outsource the jobs of CEOs?  If business is all about cost, they should be the first to volunteer.— Lou Dobbs, CNN financial correspondent and author of Exporting America (September 2004)

When was the last time you heard of a CEO's job being outsourced?  It just doesn't happen.— Lou Dobbs, CNN financial correspondent and author of Exporting America (12/2/04)

I am pro-business, not pro-stupidity.— Lou Dobbs, CNN financial correspondent and author of Exporting America (12/2/04)

To the fervent proponents of ruthless corporate capitalism I say: make a millionaire CEO live as a poor sweatshop worker in Indonesia for one month and then ask him about the merits of the world economic system.—Vassilis Epaminondou 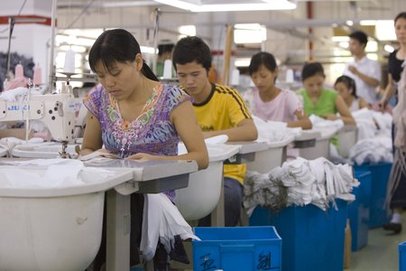 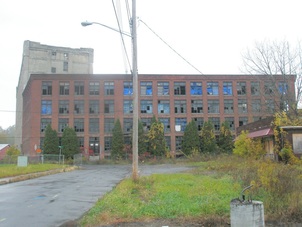 Abandoned factory in Amsterdam, NY
The ongoing fight for justice does not end on an American factory floor. It extends to many regions of the world. We are all exploited by these global companies, by globalization.—Ed Havaich, GE worker and Union member

When Reagan and Bush were running in 1980, they said, "We're going to get American industry moving again." And they did--to Taiwan, Mexico, Saudi Arabia--everywhere except here.—Jim Hightower, columnist and commentator

From the social point of view, the educational systems are oriented to maintaining the existing social and economic structures instead of transforming them.—Wilhelm von Humboldt

Where there can be shown to be no difference in labor cost, I am for free trade.  But the difference must be determined by real experts who understand the use and limits of statistics.—Robert M. LaFollette, Sr. (emphasis added)

Today I send this message to every emerging global corporation: "justice; family, community, and union" are the same in every language and, wherever you go and whatever you do, a new global labor movement is coming to find you.—Andy Stern, SEIU President

Today's global corporations have no permanent home, recognize no national borders, and salute no flag but their own corporate logo and take their money to anywhere where they can make the most--and pay the least... So today I am asking you, SEIU’s 21st century leaders, to decide to go where no union has ever gone before to authorize SEIU to pursue alliances that will build the first truly global union in world history.—Andy Stern, SEIU President

There is a growing consensus that Globalization must now be reshaped to reflect values broader than simply the freedom of capital.—John Sweeney

Clearly, the Global Economy isn't working for workers in China and Indonesia and Burma any more than it is for workers here in the United States.—John Sweeney

We can no longer allow multi-nationalists to parade as agents of progress and democracy in the newspapers, even as they subvert it at the workplace.—John Sweeney

If Free Trade has been so good to our standard of living, then WHY has our largest employer gone from high union wage paying and benefits GM to low wage paying benefits skirting Wal-Mart???—Barbara Toncheff (from jobjournal.com)

Who said the United States was going to be a service nation, we were going to let everyone else produce?  That's crap!—William ("Wimpy") Winpisinger, International Association of Machinists president ("Winpisinger Speaks Out")

Why should [corporations] have the unfettered right to run all over the globe and do anything they want to do no matter who it discommodes, no matter who it injures, no matter which communities die from it, no matter how high the social scrap heap gets?—William ("Wimpy") Winpisinger, International Association of Machinists president ("Winpisinger Speaks Out")

I'm not interested in the corporation saying "You've got to compete against it or I'll take it over there."  Up yours, I tell them, buddy.  You might go there, but you go there and engage in a capital pool over there.  And build it the same way you built it here...but you're not taking profits that are the product of the hard worked for earnings of American citizens buying your products and then take it away from them.—William ("Wimpy") Winpisinger, International Association of Machinists president  ("Winpisinger Speaks Out")

Somebody wants access to your market, you get access to theirs.  And if they don't give you access to theirs, shut them off from ours.—William ("Wimpy") Winpisinger, International Association of Machinists president ("Winpisinger Speaks Out")

When a company wants to close down, move out and discontinue jobs in a community that has provided tax breaks and a good labor supply, the company owes the community something more than a goodbye.  The company ought to come before the bar, as it were, and justify why it has to close down.  If it cannot be justified it should be forbidden.  If it closes anyway, seize the assets for the community.—William ("Wimpy") Winpisinger, International Association of Machinists president