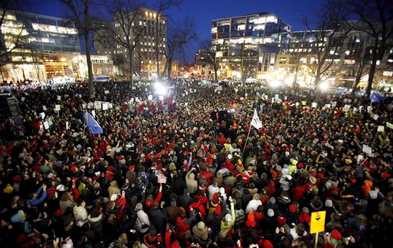 '70,000 In Solidarity' - WI, 2/19/11 (photo by Al Rodgers)
If you come only to help me, you can go back home.  But if you consider my struggle as part of your struggle for survival, then maybe we can work together.—Aboriginal wise woman

Upon the conduct of each depends the fate of all.—Alexander The Great

In Unity there is strength; We can move mountains when we're united and enjoy life --Without unity we are victims. Stay united.—Bill Bailey

The most important word in the language of the working class is "solidarity."—Harry Bridges

The people united will never be defeated.— Cesar Chavez

When spiders unite, they can tie down a lion.—Ethiopian Proverb


If the workers of the world want to win, all they have to do is recognize their own solidarity. They have nothing to do but fold their arms and the world will stop. The workers are more powerful with their hands in their pockets than all the property of the capitalists. . . .—Joseph Ettor, IWW organizer

It is always somewhat perplexing and sometimes shocking to hear, from respected unionists, a lack of concern for the struggle of brothers and sisters outside their own backyards. Such failure to bear faith and allegiance to real solidarity is what lies at the heart of labor's inability to coalesce into the force that some of our greatest leaders have envisioned. We must come to the realization that we are all coworkers, brothers and sisters in the struggle with owners.—Donald L. Foley, APWU National Business Agent (posting on 21st Century Postal Worker)

We must indeed all hang together, or, most assuredly, we shall all hang separately.—Benjamin Franklin, July 4, 1776

If the workers are organized, all they have to do is to put their hands in their pockets and they have got the capitalist class whipped.—William Dudley "Big Bill" Haywood

Remember that you are fighting more than your own fight.  You are fighting for the entire working class and you must stand together.—William Dudley "Big Bill" Haywood, to the striking mill workers in Lawrence, Massachusetts, 1912 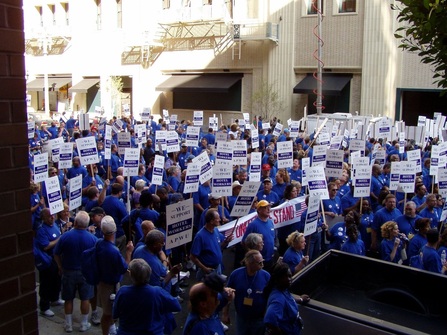 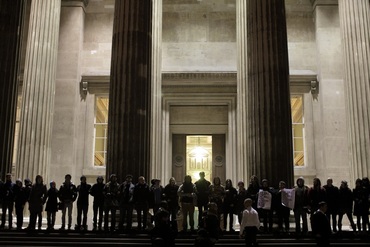 Solidarity in Cairo ousted a dictator while protecting the museum
Don't mourn for me--ORGANIZE!—Joe Hill

I am convinced that if the members of labor organizations would follow some of the tactics of the employers organizations their movement could more successfully withstand its opponents and to progress as it has in the past. But if we are to be successful we must have, above all things, more loyalty and less selfishness.— Charles E. James, African-American Union leader, 1907

There are no problems we cannot solve together, and very few that we can solve alone.—Lyndon Baines Johnson

My friends, it is solidarity of labor we want. We do not want to find fault with each other, but to solidify our forces and say to each other: “We must be together; our masters are joined together and we must do the same thing.”—Mother Jones, 1902

There may be a tomorrow or there may not, but there were and are those moments when we come together and put our selves beyond the reach of self and acknowledge that we are all one.--Michael P. Kaehler, Saint Cloud MN Area Local APWU

We must learn to live together as brothers or we are going to perish together as fools.-- Martin Luther King, Jr.

We are American workers and, most importantly, we are human beings!—Moe Lepore, Boston Metro Area Local APWU (1985)

Our America is under siege. Everywhere we look labor is being attacked and, to our chagrin, so are our Veterans, elderly and disenfranchised.  There should be outrage from one and all.  This is OUR America, isn't it?  DAMN RIGHT!—Moe Lepore, President Boston Metro Area Local APWU (2003)

Let the workers organize. Let the toilers assemble. Let their crystallized voice proclaim their injustices and demand their privileges. Let all thoughtful citizens sustain them, for the future of Labor is the future of America.—John L. Lewis

Never doubt that a small group of thoughtful committed citizens can change the world. Indeed it's the only thing that ever has.-- Margaret Mead


It is not much matter which we say, but mind, we must all say the same.-- Lord Melbourne

The essential point here is that all people with small, insecure incomes are in the same boat and ought to be fighting on the same side. Probably we could do with a little less talk about’ capitalist’ and ‘proletarian’ and a little more about the robbers and the robbed.--George Orwell (The Road To Wigan Pier)

Those who expect to reap the blessings of freedom must, like men, undergo the fatigue of supporting it.—Thomas Paine 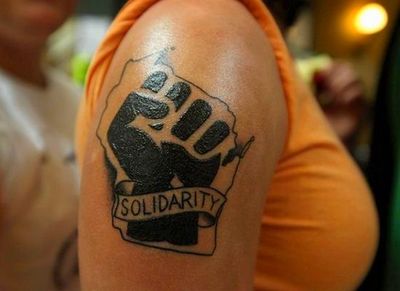 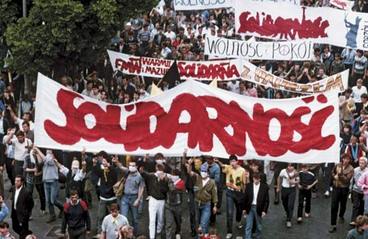 Poland's Solidarity union movement freed their nation in 1980
Organize, and stand together.  Claim something together, and at once; let the nation hear a united demand from the laboring voice, and then, when you have got that, go on after another; but get something.— Wendell Phillips

Let the nation and the world know the meaning of our numbers.—A. Philip Randolph

Suppose they’re working you so hard it’s just outrageous,
They’re paying you all starvation wages;
You go to the boss, and the boss would yell,
"Before I'd raise your pay I’d see you all in Hell."
Well, he’s puffing a big see-gar and feeling mighty slick,
He thinks he’s got your union licked.
He looks out the window, and what does he see
But a thousand pickets, and they all agree
He’s a bastard - unfair - slave driver -
Bet he beats his own wife.
—Pete Seeger, folksinger, songwriter, activist, pacifist, and humanist, from "Talking Union" (1941)

We must remember that a right lost to one is lost to all.—William Reece Smith, Jr.


He who puts out his hand to stop the wheel of history will have his fingers crushed.—Lech Walesa

The defense of our rights and our dignity, as well as efforts to never let ourselves to be overcome by the feeling of hatred--this is the road we have chosen.—Lech Walesa

A downtrodden class... will never be able to make an effective protest until it achieves solidarity.—H.G. Wells