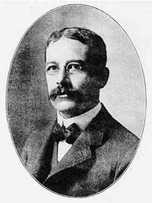 It's no use trying to be clever--we are all clever here; just try to be kind--a little kind. —F.J. Foakes Jackson

The home is the most effective place to preach the gospel of unionism.— Charles E. James, African-American Union leader, 1905

I am convinced that if the members of labor organizations would follow some of the tactics of the employers organizations their movement could more successfully withstand its opponents and to progress as it has in the past. But if we are to be successful we must have, above all things, more loyalty and less selfishness.— Charles E. James, African-American Union leader, 1907

Nellie Stone Johnson
The mass of mankind has not been born with saddles on their backs, nor a favored few (born) to ride them.—Thomas Jefferson

A wise and frugal government, which shall leave men free to regulate their own pursuits of industry and improvement, and shall not take from the mouth of labor the bread it has earned -- this is the sum of good government.—Thomas Jefferson

A little rebellion now and then is a good thing.—Thomas Jefferson

Each of us has the power to be good or to be evil. That choice is yours and yours alone. The tragedy of our world is not that so many have chosen to be evil, but that so few have made any choice at all.—Martin Johns, Red Bank Local, APWU

If people expend so much time and effort telling you how insignificant you are, how powerless you are, how weak you are, how hopeless is your cause...they do so because the opposite is true and they fear that you will realize that you are the one with the power, strength and significance and they are the poser.  Bravado is always a mask hiding insecurities.--Martin Johns, 7/24/15

The problem with unions today is that there aren't enough of them.--Martin Johns, 2011

The last time I saw EFCA [the Employee Free Choice Act] was on the back of a milk carton.--Martin Johns, 5/21/11

There is a joke circulating that goes like this:
A unionized public employee, a member of the Tea Party and a Big Corp CEO are sitting at a table. In the middle of the table there is a plate with a dozen cookies on it. The CEO reaches across and takes 11 cookies, looks at the tea partier and says, "Look out for that union guy, he wants a piece of your cookie."--Dave Johnson, economic/industrial writer and Fellow at Campaign For America’s Future, as well as a former CEO ("America Waking Up To The Value Of Unions")

The least powerful person in the country, understanding collective bargaining, can become the most powerful, and that is what politics is all about.—Nellie Stone Johnson

I'm not going to quit. There is too much to do. People need jobs, equality, education. We still need to organize to learn how the economics and politics drive everything in life. Can't stop now.—Nellie Stone Johnson, at the age of 90 in 1995


There are no problems we cannot solve together, and very few that we can solve alone.—Lyndon Baines Johnson

A bad day at work is better than a good day in hell.—Scott Johnson 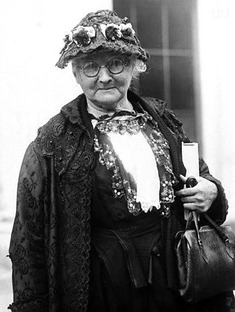 Mother Jones
My friends, it is solidarity of labor we want. We do not want to find fault with each other, but to solidify our forces and say to each other: “We must be together; our masters are joined together and we must do the same thing.”—Mother Jones, 1902

Pray for the dead, and fight like hell for the living.—Mother Jones

I know that there are no limits to which the powers of privilege will not go to keep the workers in slavery.—Mother Jones

The governor can stop a strike any time. If I were the governor I would stop a strike by simply saying, "These men have a grievance and demand redress from you. Come and discuss these questions with the miners on the fair soil of America like intelligent, law-abiding citizens. If you refuse I will close up your mines. I will have the state operate mines for the benefit of the nation." It is not right for public officials to bring scabs and gunmen into any state. I am directly opposed to it myself, but if it is a question of strike or you go into slavery, then I say strike until the last one of us drop into our graves.—Mother Jones, 1913

On their side the workers had only the constitution. The other side had bayonets.—Mother Jones

I learned in the early part of my career that labor must bear the cross for others' sins, must be the vicarious sufferer for the wrongs that others do.—Mother Jones

The producer, not the meek, shall inherit the earth.  Not today perhaps, nor tomorrow, but over the rim of the years my old eyes can see the coming of another day.—Mother Jones, at the age of 93 (1923)

The next generation will not charge us for what we've done; they will charge and condemn us for what we have left undone.—Mother Jones

I'm not a humanitarian, I'm a hell-raiser.—Mother Jones

I asked a man in prison once how he happened to be there and he said he had stolen a pair of shoes. I told him if he had stolen a railroad he would be a United States Senator.—Mother Jones 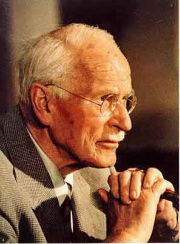 Carl Jung
Obstacles don't have to stop you. If you run into a wall, don't turn around and give up. Figure out how to climb it, go through it, or work around it.... —Michael Jordan

I understand very well the profound human need for convenient solutions, but I do not see why truth should bow to this need.—Carl Jung (Psychological Types)

We should not pretend to understand the world only by intellect; we apprehend it just as much by feeling.—Carl Jung (Psychological Types)

Every individual is an exception to the rule.—Carl Jung (Psychological Types)

The healthy man does not torture others -- generally it is the tortured who turn into torturers.—Carl Jung

There may be a tomorrow or there may not, but there were and are those moments when we come together and put our selves beyond the reach of self and acknowledge that we are all one.--Michael P. Kaehler, Saint Cloud MN Area Local APWU 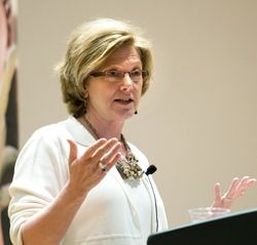 Marjorie Kelly
We have words for racism and sexism, but wealth discrimination isn't fully recognized.  It is a bias in favor of the wealthy and against labor, the environment, and the community.  Concern for the public good must become the animating force of our economic order. —Marjorie Kelly, journalist and corporate reformerWe must design a corporate system in which all economic rights are equally protected, not only the rights of shareholders.—Marjorie Kelly, journalist and corporate reformerCorporate power lies behind nearly every major problem we face--from stagnant wages and unaffordable health care to overconsumption and global warming.... With all this happening, why do we not read more about the pervasiveness of corporate power?  In large part because even the "Fourth Estate," our media establishment, is majority owned by a handful of mega-corporations.—Marjorie Kelly, journalist and corporate reformer (from "How Popular Movements Can Confront Corporate Power And Win")

We must recognize that ultimately our struggle is for power.  It is not just to make corporations more responsible, but to make them our servants.—Marjorie Kelly, journalist and corporate reformer (from "How Popular Movements Can Confront Corporate Power And Win")

While employees and the community are left to the protection of the invisible hand, wealth is protected by the visible hand of government and corporations.  But that is something, it is hoped, that will be overlooked.—Marjorie Kelly, journalist and corporate reformer (from The Divine Right Of Capital: Dethroning the Corporate Aristocracy)

Picture a free market in which labor rights are enthroned in law, and property rights are left to the invisible hand.  This would be a world in which we believe employees are the corporation.  They are, after all, the ones running the place.  Hence only employees could vote for the board of directors, and the purpose of the corporation would be to maximize income for employees.--Marjorie Kelly, journalist and corporate reformer (from The Divine Right Of Capital: Dethroning the Corporate Aristocracy)

We should put the wealth in the hands of those that create it, which is employees.—Marjorie Kelly, journalist and corporate reformer 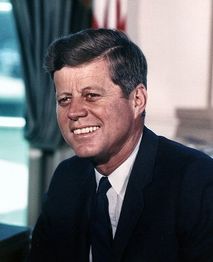 No one who works for a living should live in poverty.—Senator Edward Kennedy

Be patient. It may take thirty years, but sooner or later they'll listen to you, and in the meantime, keep kicking ass.—Florynce R. Kennedy

The American Labor Movement has consistently demonstrated its devotion to the public interest. It is, and has been, good for all America.—John F. Kennedy

Our labor unions are not narrow, self-seeking groups. They have raised wages, shortened hours, and provided supplemental benefits. Through collective bargaining and grievance procedures, they have brought justice and democracy to the shop floor.—John F. Kennedy

If a free society cannot help the many who are poor, it cannot save the few who are rich.—John F. Kennedy

One man can make a difference, and every man should try.—John F. Kennedy

It's better to be a lion for a day than a sheep all your life.—Elizabeth Kenny 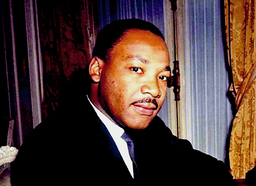 If a man hasn't discovered something that he would die for, he isn't fit to live.--Martin Luther King, Jr.

Injustice anywhere is a threat to justice everywhere. We are caught in an inescapable network of mutuality, tied in a single garment of destiny.--Martin Luther King, Jr.

We must learn that passively to accept an unjust system is to cooperate with that system, and thereby to become a participant in its evil.-- Martin Luther King, Jr.

In our glorious fight for civil rights, we must guard against being fooled by false slogans, as 'right-to-work.' It provides no 'rights' and no 'works.' Its purpose is to destroy labor unions and the freedom of collective bargaining... We demand this fraud be stopped.--Martin Luther King, Jr.

In our society it is murder, psychologically, to deprive a man of a job or an income. You are in substance saying to that man that he has no right to exist. You are in a real way depriving him of life, liberty, and the pursuit of happiness, denying in his case the very creed of his society.--Martin Luther King, Jr.

What good does it do to sit at the counter when you cannot afford a hamburger?--Martin Luther King, Jr.

The time is always right to do what is right.--Martin Luther King, Jr.

More men are killed by overwork than the importance of the world justifies.—Rudyard Kipling 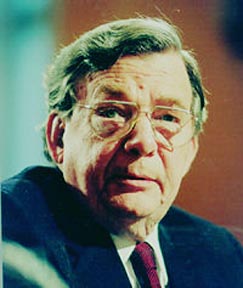 Lane Kirkland
If hard work were such a wonderful thing, surely the rich would have kept it all to themselves.— Lane Kirkland

Millions of courageous and steadfast working people -- encouraged by President Roosevelt -- stuck their necks out for their unions, built their ladder into the middle class, and created a market that became the envy and target of the world. I would suggest that the benefits of this struggle have flowed not only to working people but to the corporate enterprises that have flourished in that market.— Lane Kirkland

Never get into an argument with people who buy printing ink by the barrel.— Lane Kirkland

We have come too far, -- struggled too long, -- sacrificed too much and have too much left to do, -- to allow that which we have achieved for the good of all to be swept away without a fight. And we have not forgotten how to fight.— Lane Kirkland

An injury to one is the concern of all.—Slogan of The Knights of Labor, circa 1880's