There are more instances of the abridgment of freedoms of the people by gradual and silent encroachment of those in power than by violent and sudden usurpations.—James Madison

Teach thy tongue to say "I don't know."—Maimonides

Be ashamed to die until you have won some victory for humanity.-- Horace Mann

It is better to have a right destroyed than to abandon it because of fear.-- Phillip Mann

In unaired rooms, mothers and fathers sew by day and by night. Those in the home sweatshop must work cheaper than those in the factory sweatshops. . . . And the children are called in from play to drive and drudge beside their elders. . . All the year in New York and in other cities you may watch children radiating to and from such pitiful homes. Nearly any hour on the East Side of New York City you can see them -- pallid boy or spindling girl -- their faces dulled, their backs bent under a heavy load of garments piled on head and shoulders, the muscles of the whole frame in a long strain. . . . Is it not a cruel civilization that allows little hearts and little shoulders to strain under these grown-up responsibilities, while in the same city, a pet cur is jeweled and pampered and aired on a fine lady's velvet lap on the beautiful boulevards?—Edwin Markham, poet, in Cosmopolitan magazine, January 1907

When a man tells you that he got rich through hard work, ask him whose.-- Don Marquis

To obtain a just compromise, concession must not only mutual--it must be equal also....There can be no hope that either will yield more than it gets in return.—Supreme Court Justice John Marshall

The day you no longer burn with love, many others will die of the cold.—Mauriac

It is impossible to defeat an ignorant man in argument.—William G. McAdoo

We live in the richest country in the world. There's plenty to spare and for no man, woman, or child to be in want. And in addition to this our country was founded on what should have been a great , true principle -- the freedom, equality, and rights of each individual. Huh! And what has come of this start? There are corporations worth billions of dollars--and hundreds of thousands of people who don't get to eat. -- Carson McCullers

Peter J. McGuire
In the present age there is no hope for the workingman outside of organization.-- Peter J. McGuire, co-founder of the American Federation of Labor and reported "father" of Labor Day

We must elevate the craft, protect its interests, advance wages, reduce the hours of labor, spread correct economic doctrines and cultivate a spirit of fraternity among the working people regardless of creed, color, nationality or politics. These principles are the foundation principles of our organization.-- Peter J. McGuire

No festival of martial glory or warrior's renown is this; no pageant pomp of war-like conquest, no glory of fratricidal strife attend this day. It is dedicated to peace, civilization and the triumphs of industry. It is a demonstration of fraternity and the harbinger of a better age--a more chivalrous time, when labor shall be best honored and well rewarded..-- Peter J. McGuire, speaking about Labor Day

Instantly, the noise stopped. The whole room lay in perfect silence. The tire builders stood in long lines, touching each other, perfectly motionless, deafened by the silence....  For the first time in history, American mass-production workers had stopped a conveyor belt and halted the inexorable movement of factory machinery.-- Ruth McKenney, ("Industrial Valley")

Rapid growth in wealth inequality results in the inevitable isolation of a very small, very rich, very privileged section of the community from the material experiences of everyone else. And when this out-of-touch minority group is enfranchised to make the decisions on behalf of people they don't know, can't see, have no wish to understand, and think of entirely in dehumanised, transactional, abstract terms, the results for the rest of us are devastating.--Sally McManus, Australian trade unionist

Never doubt that a small group of thoughtful committed citizens can change the world. Indeed it's the only thing that ever has.-- Margaret Mead 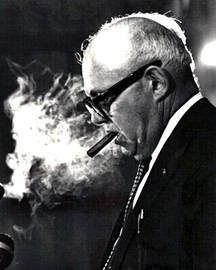 George Meany
Every piece of progressive social legislation passed by Congress in the 20th century bears a union label.—George Meany

One cannot have a trade union or a democratic election without freedom of speech, freedom of association and assembly.  Without a democratic election, whereby people choose and remove their rulers, there is no method of securing human rights against the state.  No democracy without human rights, no human rights without democracy, and no trade union rights without either. That is our belief; that is our creed.—George Meany, 1979

The basic goal of labor will not change. It is -- as it has always been, and I am sure always will be -- to better the standards of life for all who work for wages and to seek decency and justice and dignity for all Americans.—George Meany

The American trade union movement-unlike any other labor movement in the world-is committed to working within the American political and economic system in order to achieve the social and economic justice promised by the Declaration of Independence and the Constitution.—George Meany, 1978 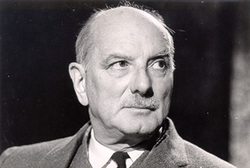 Lewis Mumford
It is not much matter which we say, but mind, we must all say the same.-- Lord Melbourne

We've been robbed long enough.  It's time to strike.—slogan of the Minnesota Iron Range miners strike of 1916

This troubled planet is a place of the most violent contrasts. Those that receive the rewards are totally separate from those who shoulder the burdens. It is not a wise leadership.—Mr. Spock of "Star Trek"

It is not only what we do, but also what we do not do for which we are accountable.—Moliere

A Society that gives to one class all the opportunities for leisure and to another all the burdens of work condemns both classes to spiritual sterility.—Lewis Mumford, American historian, sociologist and philosopher

A man of courage never needs weapons, but he may need bail.—Lewis Mumford, American historian, sociologist and philosopher

Kites rise against, not with, the wind.—Lewis Mumford, American historian, sociologist and philosopher


Only through a union built on real union principles can we hope to win real economic justice.—Richard Myers

No man can think clearly when his fists are clenched.-- George Jean Nathan

Bad officials are elected by good citizens who do not vote.-- George Jean Nathan

No matter how old or young you are, the calendar sometimes seems like nothing more than a way of marking time’s hastiness. The year begins, you hit the snooze alarm a few times, and the next thing you know, it’s Labor Day.--New York Times editorial, September 6, 2009

You know very well that whether you are on page one or page thirty depends on whether they fear you. It's as simple as that.—Richard Nixon

One of my favorite jibes is, "I like you. I'll try to protect you when the revolution comes." I've been a little nervous about using it lately. —Sterling Nusbaum, APWU (WV)

The true face of the unions is not now a man in a hard hat as much as it is a woman in a classroom or in cleaning smocks.—Karen Nussbaum, SEIU


If American workers are being denied their right to organize and collectively bargain when I'm in the White House, I will put on a comfortable pair of shoes myself and I will walk on that picket line with you as President of the United States of America.  Because workers deserve to know that somebody is standing in their corner.—Barack Obama (as candidate), November 3, 2007


It was working men and women who made the 20th century the American century. It was the labor movement that helped secure so much of what we take for granted today.  The 40-hour work week, the minimum wage, family leave, health insurance, Social Security, Medicare, retirement plans.  The cornerstones of the middle-class security all bear the union label.—President Barack Obama, speech at Laborfest, September 6, 2010 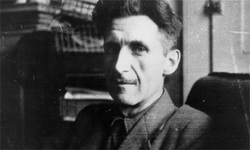 George Orwell
[T]he strike is inherently dangerous to the rich, and to the corporations who have brought this country to her knees, because it is the only defense the ordinary citizen has.—Keith Olbermann, speech at Cornell University, March 29, 2011

Every day I get up and look through the Forbes list of the richest people in America. If I'm not there, I go to work.—Robert Orben

We're just honest working men that have been pushed so far and so hard that we can't keep it up any longer.—Frances O'Rourke, 1937 UAW sitdown striker

The essential point here is that all people with small, insecure incomes are in the same boat and ought to be fighting on the same side. Probably we could do with a little less talk about’ capitalist’ and ‘proletarian’ and a little more about the robbers and the robbed.--George Orwell (The Road To Wigan Pier)

All animals are equal, but some animals are more equal than others.—George Orwell (Animal Farm)

If liberty means anything at all, it means the right to tell people what they do not want to hear.—George Orwell

If you want a picture of the future, imagine a boot stamping on a human face--forever.—George Orwell (1984)

During times of universal deceit, telling the truth becomes a revolutionary act.—George Orwell

You win some, and some get stolen.—U.S. Representative C.L. "Butch" Otter (R-ID)