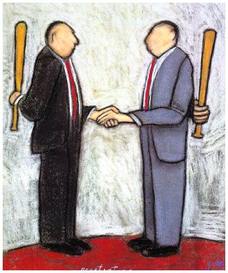 When you say fiscal responsibility, it seems to me that you really mean rich people keeping their money.—Alice Adams

Any excuse will serve a tyrant.—Aesop

The lion and the calf shall lie down together, but the calf won't get much sleep.—Woody Allen

At critical times the authorities always claim they have no authority.—Anonymous

Pay attention to your enemies, for they are the first to discover your mistakes.-- Antisthenes


No issue can be negotiated unless you first have the clout to compel negotiation.—Saul Alinsky

Power is not only what you have but what the enemy thinks you have.—Saul Alinsky

Tactics mean doing what you can with what you have...tactics is the art of how to take and how to give.--Saul Alinsky

The threat is usually more terrifying than the thing itself.--Saul Alinsky, from his Thirteen Tactical Rules

When a man says he approves of something in principle, it means he hasn't the slightest intention of putting it in practice.—Bismarck

I would have worked with the devil himself if he'd been for the six hour day and worker control of the hiring hall.—Harry Bridges

Show me a guy who’s afraid to look bad, and I’ll show you a guy you can beat every time.—Lou Brock, baseball player

Before you kill something make sure you have something better to replace it with...—Charles Bukowski, poet and postal worker, author of Post Office

All government, indeed every human benefit and enjoyment, every virtue, and every prudent act, is founded on compromise and barter.—Edmund Burke

You can not negotiate with the turkey over what day Thanksgiving is.  Whether it is Thursday or Friday, the turkey is the victim.  And WE will NOT be victimized!—APWU President William Burrus, Postal Press Association Conference, 8/2/03

A pig with lipstick is still a pig.—William Burrus, 1998

Diplomacy is saying 'nice doggy' until you find a rock.—Wyn Catlin

When morality comes up against profit, it is seldom that profit loses.— Congresswoman Shirley Chisholm 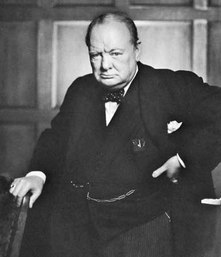 We will have no truce or parley with you, or the grisly gang who work your wicked will.  You do your worst--and we will do our best.—Sir Winston Churchill

When you have to kill a man, it costs nothing to be polite.—Sir Winston Churchill

Mahatma Gandhi
The only thing workers have to bargain with is their skill or their labor. Denied the right to withhold it as a last resort, they become powerless. The strike is therefore not a breakdown of collective bargaining-it is the indispensable cornerstone of that process.— Paul Clark, 1989

If you ever saw a cat and a dog eating out of the same plate, you can bet your ass it was the cat’s food.— Congressman William Clay

You must start with the premise that you have no permanent friends, no permanent enemies, just permanent interests.— Congressman William Clay, Sr.

Concessionary bargaining destroys the power of a union in the same way that cancer destroys the body.--Shamus Cooke

History teaches us that men and nations behave wisely once they have exhausted all other alternatives.—Abba Eban

Peace cannot be kept by force; it can only be achieved through understanding.—Albert Einstein

People have power when other people think they have power.—Wyche Fowler


We must always seek to ally ourselves with that part of the enemy that knows what is right.—Mahatma Gandhi


We have our principles, but we also must do things that are constantly compromising those principles.—Arthur Joseph Goldberg

If you pay peanuts, you get monkeys.—James Goldsmith

A grievance is most poignant when almost redressed.—Eric Hoffer

You can discover what your enemy fears most by observing the means he uses to frighten you.—Eric Hoffer 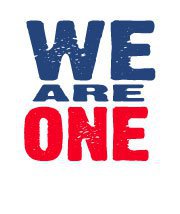 The least powerful person in the country, understanding collective bargaining, can become the most powerful, and that is what politics is all about.—Nellie Stone Johnson

Never get into an argument with people who buy printing ink by the barrel.— Lane Kirkland

The drop of rain maketh a hole in the stone, not by violence, but by oft falling.-- Hugh Latimer

To obtain a just compromise, concession must not only mutual--it must be equal also....There can be no hope that either will yield more than it gets in return.—Supreme Court Justice John Marshall

It is impossible to defeat an ignorant man in argument.—William G. McAdoo

No man can think clearly when his fists are clenched.-- George Jean Nathan

You win some, and some get stolen.—U.S. Representative C.L. "Butch" Otter (R-ID)

There are some men who, in a 50-50 proposition, insist on getting the hyphen, too.— Lawrence J. Peter

Divide and Conquer. As long as some people have commanded the work of others, this has been management's basic principle.—Peter Rachleff, labor historian

One of the best ways to persuade others is with your ears--by listening to them.—Dean Rusk

The main mistake made by unions is people not being willing to talk to people that you strongly disagree with. Not just talk, but communicate.—Pete Seeger, folksinger, songwriter, activist, pacifist, and humanist

I must tell you that the supply of words on the world market is plentiful, but the demand is falling.  Deeds must follow words.—Lech Walesa

Until you have a seat at the table, you’re probably on the menu.
--Elizabeth Warren